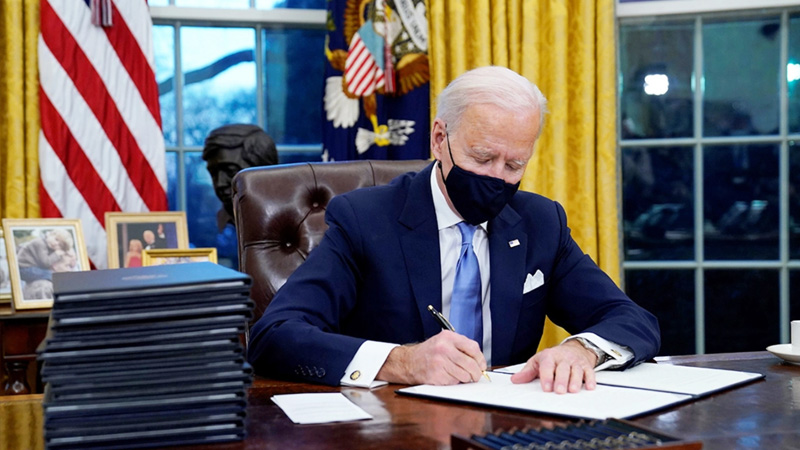 New U.S. President Joe Biden has frozen all agency rulemaking, including the proposal by the Financial Crimes Enforcement Network (FinCEN) relating to cryptocurrency wallets. Biden will appoint someone to “review any new or pending rules,” the White House has announced.

Joe Biden, the 46th president of the United States, has frozen all rulemaking carried over from the previous administration, the White House announced after his inauguration Wednesday. This would include the proposal by the Financial Crimes Enforcement Network (FinCEN) affecting cryptocurrency wallets. The freeze is “In order to ensure that the president’s appointees or designees have the opportunity to review any new or pending rules.”

With respect to rules that … have not taken effect, consider postponing the rules’ effective dates for 60 days from the date of this memorandum.

“For rules postponed in this manner, during the 60-day period … consider opening a 30-day comment period to allow interested parties to provide comments about issues,” it adds, noting that the delay could be extended if necessary.

The lawyer added: “We fought hard & earned the right to take a breath & reset. Janet Yellen isn’t Steve Mnuchin. I’m optimistic.” Biden has picked Yellen to become the new Treasury Secretary. The former Federal Reserve chair is not a fan of bitcoin or cryptocurrencies herself, stating during a recent Senate hearing that cryptocurrencies are mostly used for illicit financing.

Besides FinCEN’s rulemaking on cryptocurrency wallets, Biden has inherited a few other crypto regulatory issues from the Trump administration relating to the Office of the Comptroller of the Currency (OCC). Former OCC chief Brian Brooks had warned that some of the positive crypto regulations he approved may be rolled back during the Biden administration. They include allowing banks to provide crypto custody services and use public blockchains and stablecoins.

“Blockchain, cryptocurrency, and decentralized finance are doing to banks what email did to the post office. Our job is to rethink the role of banks,” Brooks highlighted in an article he authored on The Hill last week. “Because of their investment in technology, banks will be key nodes that validate transactions on decentralized ledgers, and will transmit and receive tokens across blockchains like they process digital payments today,” he opined. “Banks will also provide advice, custody, and structured products. Banks could also reprise their 19th century role of issuing Treasury notes and issue digital coins backed by dollars.” He additionally noted:

Cryptocurrency and decentralized finance present several benefits … If the United States focuses on the risks and not the benefits, we will fall behind as the global financial system is rewired.

The former top banking regulator is particularly concerned about a proposal by Congresswoman Maxine Waters. He urged the Biden administration not to “combine politics and innovation.” Brooks explained that “House Financial Services Chairwoman Maxine Waters proposes reversing innovation that occurred in the last four years,” adding that “She wants to retract the ability for banks to hold cryptocurrency assets and to rescind guidance that banks can support digital coins.”

There are also some outstanding crypto-related issues at the U.S. Securities and Exchange Commission (SEC), including the lawsuit against Ripple Labs and its executives. Biden has nominated MIT’s blockchain professor Gary Gensler to become the new SEC chairman.