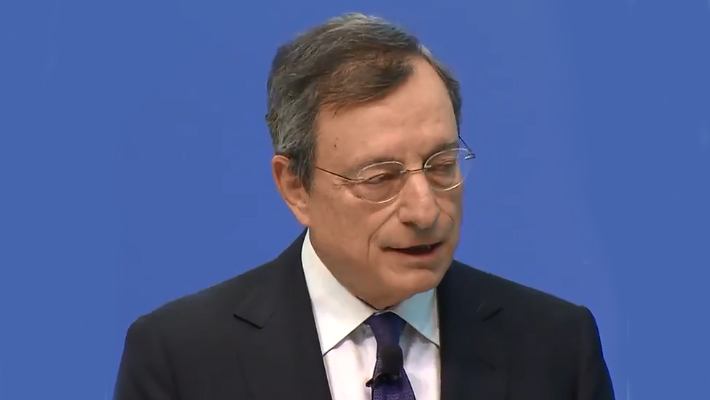 A student asked European Central Bank (ECB) President Mario Draghi about his stance on Bitcoin. Draghi told the student that cryptocurrencies are not currencies, but “highly risky” assets.

MARIO DRAGHI: “WHO IS BEHIND THE CRYPTOCURRENCIES?”

The central banker then raised questions about the origins of cryptocurrencies.

“Bitcoins or anything like that are not really currencies, they are assets. A euro is a euro – today, tomorrow, in a month, it’s always a euro. And the ECB is behind the euro. Who is behind the cryptocurrencies? So they are very, very risky assets, the value of which oscillates – as you’ve seen – wildly.”

Draghi does not believe that cryptocurrencies pose a significant impact on existing fiat-based economies.

“At this point in time they are not significant enough in their entity that they could affect our economies in a macro way.”

He believes they are just speculative assets that perhaps need regulation. The macro effect of cryptocurrencies has yet to be seen.

BITCOIN NOT IMPORTANT ENOUGH FOR ECB TO REGULATE

Several million people hold cryptocurrencies, and many millions trade them. Still, the overall impact of cryptocurrency on real-world economies has so far been limited.

In the case of Venezuela, inflation and economic woes have left many with no choice but to secure their money in cryptocurrency. Bitcoin and Dash have acted as a pressure relief valve that didn’t exist in previous eras.

Draghi believes that the ECB currently has no role in the crypto space and that the responsibility of regulating cryptocurrencies mainly falls on consumer protection agencies at this point.

“And so we tend to consider them as speculative assets, highly risky, but as far as the rest is concerned, it’s not really something that pertains to the central bank, the task of monitoring and regulating, possibly, this. It’s more, I would say, something that falls within the consumer protection competence, where you want to make sure that people who buy into these assets know what they do and are aware of the risks they run.”

This last bit raises an essential question for the EU, however, which is whether or not we can expect regulations similar to those recently proposed in Russia. Russians may face a situation soon where they have to be qualified investors, complete with a background in economics, to trade in cryptocurrencies. If similar regulations were put in place in Western Europe, a massive damper on regulated crypto trading would effectively arise.

That prospect raises even more critical questions about the long-term future of cryptocurrency. Brilliant people have determined that Bitcoin cannot adequately be banned through criminalization, even as Nobel laureates call for precisely that.

France, for its part, has led the way in fostering a pro-blockchain environment. Countries like Malta and Estonia have also created very pro-business, pro-Bitcoin environments, so much so that numerous blockchain companies call these places their official home.

Do these havens have a long future ahead of them, or will governments in the EU eventually decide to raise the bar for investing in cryptocurrency? If Draghi’s comments are any indication of the general opinion of crypto trading, it seems very feasible that such regulations will eventually emerge.